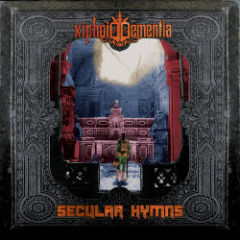 Effectively the God is an Astronaut or Godspeed You! Black Emperor of post-industrial, Xiphoid Dementia serves as a good opener to the wider world of industrial and drone-based ambient noise. Xiphoid Dementia's production quality, which usually comprises multiple genres in a layering act of sonorous sounds, is meant to instill despair and bring to mind images of bleak misery

We see this fact well enough with the first track, Abortion Rites. Beginning with a cycling drone and edging into an echoing choir, the track diverges into a sonic attack of murderous wails and distorted alarms. Electronic walls of sound gyrate to the distorted shrieks and electronic whirs and almost mystical rasps. Suddenly the wall breaks down, and we are left with neat cycles of synthetic noise. The drones, synths and vocal samples here are masterfully done, and complement the track very well.

The second track, My Time Will Never Come, starts off with much the same way. A ticking clock, reminiscent of Pink Floyd's Time, quickly drops into a wailing echo of blaring sound. It is as if the very walls of reality are being burned away, set to the creaks and hums and subsonic drones of a ruined factory. The sounds used here are not as creatively layered as the first track, utilizing short samples and loops in ways that tend to become more repetitive than before. The thing that staves off true ennui here are the screaming drones and blasts of noise we are given, even though as the clocks increase in number and frequency, the aura of despair or hopelessness is partly diminished. The second part of the track is much more creative in this aspect, featuring a chiming bell and multiple other synths and cycling sounds. Most of the album features this duality of sounds that Egan Budd, the man behind the noise, has layered and orchestrated to his whims. This track in particular leaves off with a very masterfully done buildup to bells and whistles that instill an even more depressive feeling than the last- even though the sound is the complete opposite of one would expect to be saddening.

The third track, What You Believe, begins much more darkly. A whirring machine in the background is offset by an almost industrial factory ambiance, quickly giving way to an aquatic reverberation and metallic creaks and sounds. Stone grinds on stone and walls collapse as the city slowly falls to ruin. A helicopter or some other whirring device passes by after hovering for a time overhead. Gradually the sounds layer upon each other to the point where it seems as if the very building is about to come down, straining at rotted timbers and rusted bolts. Synths and drones come into the mix as this buildup to ultimate ruin never ceases, except in furious explosions of noise and the drone of klaxons and water. The electronic synths buildup to an explosion of vocal samples that fit the buildup well- breaking back to the previous buildup with not-human shrieks and screamed words.

The fourth and final track, Breathe, begins with a claustrophobic opening of various breathings. Gasps, moans, groans, hyperventilating rasps and sighs of release, all echoing and reverberating out with a background of lightly strumming noise. This all gives way soon enough to a drone not unlike that found on dark ambient albums, with sounds and noises consistent with something more focused. The album's proficiency in multiple disciplines shows itself well here- gaining ground with the application of a variety of genres that are almost perfectly blended together. Drones mix well into eddies of electronic hums and whirs that cycle back and forth. The entire sound here creates a large space of noise to build in, beginning to layer on the savage grunts and vocal undulations of ritualistic despair. Vocal shrieks and whines coalesce into a droning sonic screech of pure hate, ending in a furious explosion of devastating aural anguish that finishes the album on a thoroughly high note.


If ever there was ambient sounds to truly inspire the industrial artist, these are them. Xiphoid Dementia's "Secular Hymns" are unto the orchestrated patterns of a conductor progressing through movements of noise into choruses of screams and droning synths. "Secular Hymns" delivers on multiple fronts in a way that few other artists can hope to emulate, having something for almost every listener be they of the dark or industrial realms. "Secular Hymns" is not an album any serious listener will want to miss- breaking ground as much as it breaks the silence of life with echoes of a much darker place only seen in half formed dreams and the stuff of primal nightmares.
Posted by Joe at 7:48 AM

A long time fan of Dark and Ritual Ambient, as well as Industrial and Black Metal, I offer subjective reviews of new releases within the genre from a knowledgeable perspective.